Control Thistles and Buttercups in Pastures During Winter

Find this article at:
go.ncsu.edu/readext?756264
— Written By Damon Pollard and last updated by Glenda Burgess

One of the most misunderstood weeds in our WNC pastures are thistles. A biennial, most of us don’t really give them a second thought until they send up their stalk with those gaudy pink flowers and spread those downy seeds hither and yond. Usually, once we recognize the stalks and flowers they have already produced viable seed. 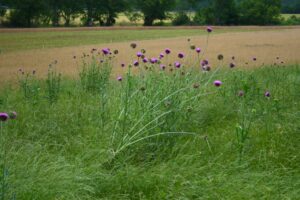 Those old stories about grandpa spending his winter days grubbing thistles, here appear to have merit. Thistles are not difficult to control with herbicides when they are treated at the proper stage of growth, but once they bolt and send up that woody stalk, control is not so easy, so treating thistles while they are in the immature rosette stage is critical.

Identifying thistles, and buttercups as well, can be difficult when the plants are immature, however, this time of year they can be identified fairly easily, as they are low to the ground, and very dark green, in a circular form, and have spiny points at the ends of each leaf. You can also use Google to find images of “musk thistle” or any other thistle, as well as buttercups. 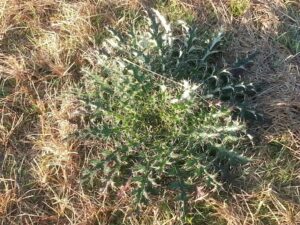 After identifying the thistles and the numbers present, you’ll need to decide if an herbicide application is warranted. If few are present, you may simply dig them out like grandpa. If they are sparsely located, you may be able spot spray with a wand or backpack. If you have a large number of rosettes you will probably want to treat the entire hayfield or pasture with a broadcast herbicide spray. Be sure that temperatures are sufficient for herbicide treatments. For 2-4-D you need an ambient temperature of 60 degrees Fahrenheit, and less than 85 degrees Fahrenheit, to avoid problems. Also avoid windy days where drift can cause problems.

There are many herbicide options for treating thistles in grass pastures and hayfields. Not many available for legumes such as alfalfa or clover, so be careful when treating in or near these crops. For treating thistles in grass pastures and hayfields in November and February, 2-4-D is the herbicide of choice, as it is readily available, and is the most cost effective. There are other options, but for thistles and many other weeds at this growth stage, 2-4-D will do an adequate job, and be less expensive. Always read the label and follow directions. 2,4-D applied in February will give control of many other broadleaf weeds such as mustard, chickweed and some buttercups.

Many herbicide labels recommend a surfactant in the tank mix to enhance their effectiveness, so read the label and follow the recommendations. Surfactants help reduce surface tension on the leaf and enable the spray solution to penetrate the leaf surface easier so that it is taken into the plant. Some herbicides already have the surfactant premixed into the product so no additional adjuvant is needed.

Thistles and most other weeds are more susceptible to herbicides when they are young and actively growing, usually less than 3-4 inches tall. Make sure that the weeds are actively growing so that herbicidal treatment will be effective. For most winter weeds, consider spraying when you have several days in a row above 60 degrees Fahrenheit. Warm sunny days stimulate growth in cool-season weeds, and they will be actively growing and controlled by herbicide applications.

Buttercups are also a problem in cool-season grass pastures, and are easily recognized in early spring by their bright yellow flowers. Buttercups possess several weedy characteristics that make it difficult to control in pastures. Populations are usually greater in low areas of fields that tend to remain wet for long periods, and in pastures with poor stands of grass. Overgrazing usually increases the buttercup populations. Buttercups will germinate in fall and will be actively growing over winter. 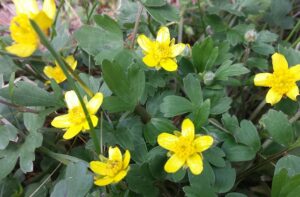 There are many species of buttercups, each with different characteristics. The bulbous, hairy and small flower buttercups tend to be more common in pastures. Pasture management techniques promoting the growth of pasture grasses will provide competition and inhibit the growth of buttercups. These practices include proper soil fertility and pH, avoidance of overgrazing, timely mowing and herbicide treatments. It is important to treat buttercups with herbicides before flowering, as treatments after flowering require higher rates and will not prevent seed formation. Try to treat buttercups when in the rosette stage, during November or February, or both if needed.

Recent evidence that some species of buttercup are not effectively controlled with 2-4-D alone has required a new strategy. With most weeds such as buttercups, there are many factors involved with herbicide control because of species variety, so control may involve several seasons. In particular, the bulbous buttercup, will not be controlled by 2-4-D alone, and control can be achieved with applications of Weedmaster (2-4-D + dicamba) or GrazonNext HL. Applications of either of these herbicides will offer sufficient control of not just buttercup and thistle species, but many more species of winter annual and perennial weeds.

By controlling thistles and buttercups now, you can economize your weed control, taking advantage of herbicide effectiveness on the immature stage of growth, while controlling additional weeds, allowing your grass pastures and hayfields to flourish.

We also have a few other email lists you can subscribe to.