What Type of Tomato Vine Do You Have?

Find this article at:
go.ncsu.edu/readext?601404
— Written By Donna Teasley and last updated by Glenda Burgess

Did you know that there are two types of tomatoes – determinate and indeterminate? Now you might ask, “so what?” Knowing which type of vine you have can make a tremendous difference in everything you do to make sure you get a good crop of tomatoes.

Tomatoes are either determinate or indeterminate. Determinate vines grow to about three feet and then stop growing. These tomatoes are great for growing in containers. The tomato is a little smaller but it doesn’t have to have a six foot stake to hold it upright. But, more importantly, you should know that determinate vines have one harvest period and then they are done. Think about that for a minute. They don’t get as tall, the fruits are smaller and they ripen all at once. How can that benefit the modern-day gardener? Well, it would be great for small spaces but looking even further, think about canning tomatoes. The fruits are smaller so they would be easier to peel and cut up, and by coming in all at once, you can get your canning done and move on the something else. In the commercial tomato production industry, most vines are determinate. Short vines are easier to pick and easier to stake, requiring less labor. Another reason that commercial tomatoes are determinate is that they ripen at the same time. A field can be picked in a couple of weeks and then the workers can move on to the next field-much more efficient. We’ve had determinate tomatoes forever but Grandma called them canning tomatoes-pretty smart, don’t you think? Here are some determinate tomatoes you’ll recognize: Rutger, Marglobe, Roma, Celebrity, Mountain Pride, Heinz and Homestead.

Indeterminate vines can grow up to twelve feet or even more. They will keep growing until frost takes them out. These plants continue to set fruit as long as the plant is alive, making the harvest period much longer. The fruits are also larger but you don’t get as many fruits per vine. Although indeterminate tomatoes are fine for canning, they are more labor intensive because they have a much larger core. Indeterminate vines can be grown in containers but care must be taken to keep them staked. When summer storms come along these tomatoes can easily topple over if they aren’t secured. There are many more indeterminate types than determinate types of tomatoes. Most of the old favorites are indeterminate types such as Better Boy, Whopper, Beefsteak, Mortgage Lifter, Cherokee Purple, Brandywine and Oxheart.

Most old-time gardeners planted both types and used them accordingly, whether for canning or fresh eating. Both types can be an asset to the garden but by understanding their growth and harvest cycles, today’s gardener can make the choices that will meet his gardening needs successfully. 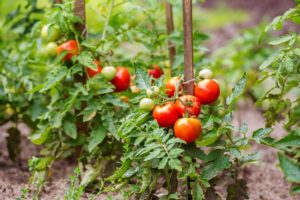