Find this article at:
go.ncsu.edu/readext?728044
— Written By Donna Teasley (2 weeks ago) and last updated by Glenda Burgess

This month’s plant is my all-time favorite tree, the ginkgo tree. Undisputedly, the most majestic of all trees, this giant has it all. It is considered to be a living fossil as it is old – very old – with fossils found dating to 270 million years ago. Not only is it old, it is also beautiful. It has a unique fan-shaped leaf and a glorious fall color of buttery yellow. Traditionally the ginkgo is massive with a mature height of 50-80 feet and a 30-40 foot spread. It is resistant to insects and diseases and is extremely drought tolerant. Not a fast grower, it averages 13-24 inches per year with a spreading canopy on most cultivars.

It was brought to the US in the late 1700s from China and grows well up to zone 8. It isn’t picky about soil conditions and can flourish in compact spaces, making it a great street tree for urban areas. The ginkgo is also tolerant of air pollution, street salt and salt spray and is easy to establish. Full sun is the best spot for the ginkgo. There are both male and female cultivars of ginkgo and the female grows an extremely fowl smelling fruit so it is recommended that only male cultivars be planted.

For those homeowners who don’t feel that they have enough space to grow a ginkgo tree, there are many compact cultivars available for today’s smaller properties. There are also columnar cultivars that don’t have a tremendous spread. Ginkgo biloba ‘Fastigiata’ is a columnar tree with a spread of 10 -15 feet. ‘Autumn Gold’ is a larger cultivar growing to 40-50 feet tall with a spread of 25-30 feet. Ginkgo biloba ‘Pendula’ is a nice dwarf cultivar, growing to 8 feet tall and there is a true dwarf, ‘Mariken’ that gets only 4 feet tall. Many cultivars of all sizes are available to those who want this tree in their landscape.

If you want to view the fabulous fall color of this tree in person, our own Gene Turner Park on North King St. here in Morganton has several large specimens for your viewing pleasure. A last interesting thought: This is what the dinosaurs used to eat! 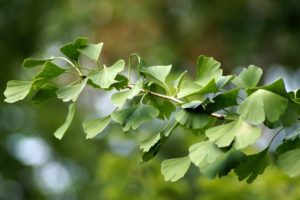 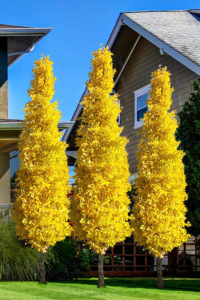 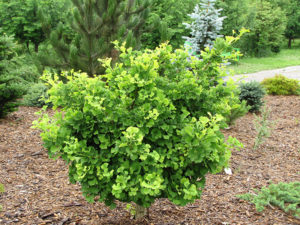 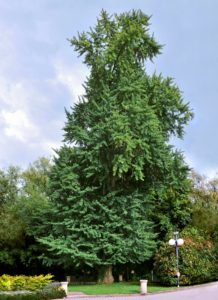