Find this article at:
go.ncsu.edu/readext?489041
— Written By Donna Teasley and last updated by Glenda Burgess

In case you haven’t noticed, fire ants have arrived in Burke County. They’ve been around for a while in small numbers but this year there has been an explosion of phone calls from all parts of the county to our office with complaints about fire ants. Accidentally brought in to Mobile, Alabama in 1930, these vicious pests spread quickly to the southeastern states and have moved steadily northward until they are now in all but a few of the northern counties of North Carolina. The bad news is that they are here to stay but the good news is that they can be controlled very successfully.

Successful fire ant control involves two steps: baiting and direct mound treatment. You may or may not see mounds as younger colonies don’t always build mounds. Colonies are located in sunny areas usually close to heat-absorbing structures such as sidewalks and driveways. Fire ant control is best achieved in late spring and early fall while temps are still mild. Success hinges upon the realization that this will be an ongoing effort. A one-time treatment will not solve the problem! Application of a bait is done first and a direct mound treatment is followed a few days later. Never use the bait and mound treatment at the same time.

Baits should not be placed directly on top of a mound as this is not where foraging is done. Entrances to the mound are found on the outside edge of the mound. The fire ants think the bait is food and carry it in to the mound where it is consumed. Foraging does not go on all the time. Drop a few potato chips around a mound in mid-morning. Check in about 20 minutes and if the chips are gone, apply bait as this tells you that the ants are actively foraging.

Direct mound treatments are good when there are only a few mounds and is faster than baiting. But, it is difficult to know if complete kill has been achieved, especially the queen. Best success is achieved when it is warm but not hot, around mid-morning. Ants will be closer to the top of the mound at this time.

There are many products available to the homeowner and most do a good job when used correctly. Remember to always read the entire label and follow the directions exactly. 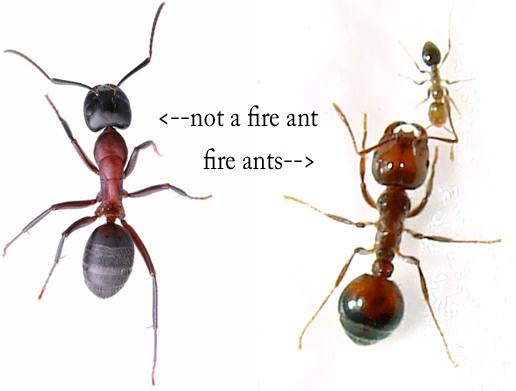