Find this article at:
go.ncsu.edu/readext?445472
— Written By Damon Pollard and last updated by Glenda Burgess

One of the most misunderstood weeds in our foothill pastures are thistles. Most of us don’t really give them a second thought until they send up their stalk with those gaudy pink flowers and spread those downy seeds hither and yond. Usually, once folks recognize the stalks and flowers they have already produced viable seed.

Thistles are not difficult to control with herbicides when they are treated at the proper stage of growth, but once they bolt and send up that woody stalk, control is not so easy, so treating thistles while they are in the rosette stage is critical.

Identifying thistles and buttercups as well, can be difficult when the plants are immature, however, this time of year they can be identified fairly easily, as they are low to the ground, and very dark green, in a circular form, and have spiny points at the ends of each leaf. You can also use Google to find images of “musk thistle” or any other thistle.

If they are sparsely located, you may be able spot spray with a wand or backpack. If you have a large number of rosettes you will probably want to treat the entire hayfield or pasture with a broadcast herbicide spray. For treating thistles in grass pastures and hayfields in Winter, 2-4-D is the herbicide of choice. Make sure the ambient temperature is at least 50 degrees F, and less than 85 degrees F, to avoid problems and avoid windy days where drift can cause problems.

There are other options, but for thistles and many other weeds at this growth stage, 2-4-D will do an adequate job, and be less expensive. Always read the label and follow directions. 2,4-D applied in February will give control of many other broadleaf weeds such as mustard, chickweed and buttercups.

Make sure that the weeds are actively growing so that herbicidal treatment will be effective. For most winter weeds, consider spraying when you have several days in a row above 60 degrees Ft. Warm sunny days stimulate growth in cool-season weeds, and thistles will be actively growing and controlled by herbicide applications.

By controlling thistles now, you can economize your weed control, taking advantage of herbicide effectiveness on the immature stage of growth, utilize less costly chemicals, and controlling additional weeds such as chickweed, mustard and buttercups, allowing your grass pastures and hayfields to flourish. 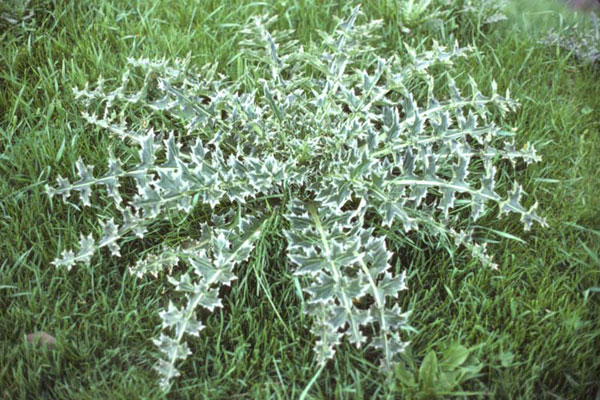